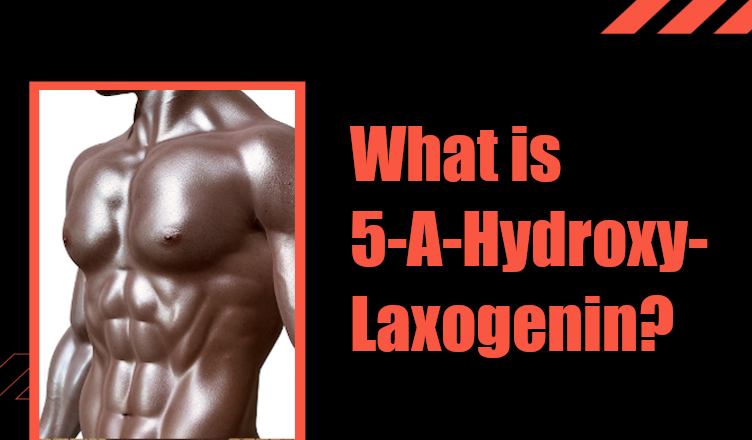 5-A-Hydroxy-Laxogenin and laxogenin are two similar steroidal saponins extracted from the Smilax Sieboldii plant. They are brassinosteroids (plant hormones) that stimulate plant growth. In 1963, laxogenin’s anabolic benefits were researched with hopes of marketing it as a muscle-building supplement.

The Beginning of “Plant Steroid” Marketing

In the early 1980s, parts of the Smilax Sieboldii plant started appearing in bodybuilding supplements marketed as the “plant steroid”, but was largely seen as a fad and was mostly forgotten.

However, Smilax Sieboldii has recently been making a big comeback due to new research done in the Netherlands. Except now, instead of using the whole plant in supplements, the technology exists to isolate the most beneficial part of the plant rhizome so that it can be taken as a supplement to build muscle mass.

The Smilax Seiboldii plant is native to Asia and in China shoots and leaves and soft shoots can be cooked and eaten. It is said to taste similar to asparagus. According to Purdue University, the plant is a famine food and not usually grown as a food source.

In Asia, it is an evergreen climbing plant that grows over 6 feet in full sun to light shade. Smilax Seiboldii flowers in the summer and seeds ripen in the fall. There are male and female plants and the species is not self-fertile. It has prickly thorns on its stems and the plant becomes woody as it matures.

It was previously believed that laxogenin from the Smilax Sieboldii plant was responsible for the anabolic results. Research has now shown that the 5-A-Hydroxy-Laxogenin is actually the compound from the plant that can be used as a supplement for increased strength and muscle mass.

Many supplement companies offer laxogenin or laxogenin-based products, which is a structurally different compound from 5-A-Hydroxy-Laxogenin and therefore will not produce the same results.

Since 5-A-Hydroxy Laxogenin is a plant-derived brassinosteroid, it does not interfere or alter the body’s natural hormones as steroid hormones or prohormones can.

Brassinosteroids are plant hormones with a similar structure to steroid hormones found in mammals. In plants, brassinosteroids regulate many of a plant’s physiological processes. They regulate the plant’s growth, development, metabolism, reproduction, immune system, and other processes. Given that these plant hormones work so hard in plants and that they share a very similar structure to our hormones, it was natural to question whether or not brassinosteroids could also be put to work to benefit humans as well.

Scientists began studying this class of polyhydroxylated steroidal phytohormones in plants in the 1970s. Brassinosteroids are the sixth defined plant hormone and are responsible for regulating many plant functions and also helps mediate plant responses to stress, nutrient deficiencies, and diseases.

How to Take 5-A-Hydroxy Laxogenin

Users report optimal results with a cycle of taking 100-200mg 5-A-Hydroxy Laxogenin per day for 6 to 12 weeks followed by a 4 to 6-week break. However, some bodybuilders have reported using it for up to 4 months.  It is recommended to start out at 100mg per day and it doesn’t matter what time of day you take it, as long as you consistently take it each day during the cycle.

Because it is naturally derived, this supplement doesn’t deplete testosterone levels or disrupt your body’s own production of other necessary hormones. Most users report no ill side effects. Some users taking extremely high dosages of 5-A-Hydroxy Laxogenin have reported headaches, but when taking the normal dosage there does not seem to be any undesirable side effects.

While athletes and bodybuilders report that 5-A-Hydroxy Laxogenin helps them build lean muscle mass, increase strength, and reach goals faster, some consumers have been duped with products that don’t work. This is because 5-A-Hydroxy Laxogenin is a similar, but different compound than laxogenin and some supplement companies are still willfully ignorant of the fact.

Some laxogenin supplements are being sold as muscle and strength building supplements, yet contain no 5-A-Hydroxy Laxogenin. Therefore it is important that consumers understand the difference in these two compounds and choose a quality supplement that contains the correct compound to achieve the desired results.

When choosing a 5-A-Hydroxy Laxogenin supplement, examine the label carefully to make sure it actually contains the correct compound, otherwise, you could be disappointed with the lack of results.

Bodybuilders who have trialed 5-A-Hydroxy Laxogenin have seen lean muscle gains of 5 – 8 pounds per cycle. Athletes have also used it for weight cuts to help maintain muscle mass while cutting calories. Since 5-A-Hydroxy Laxogenin is naturally derived, no PCT (Post Cycle Therapy) is needed. It does not suppress the body’s production of natural hormones as other performance enhancers can.

5-A-Hydroxy Laxogenin can be stacked with other muscle building supplements and/or testosterone boosters to intensify benefits and in fact, this is often recommended to maximize results.

View all posts by Editor →

What are the benefits of Taurine?

The Best Supplements for Sleeping Deeply